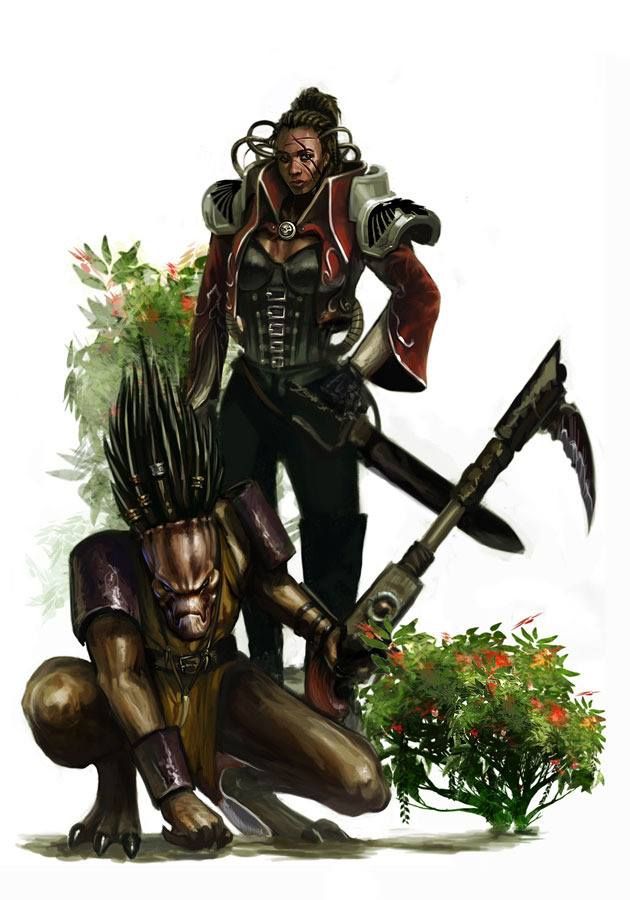 Oaka – click to view full reply. Oaka It’s about time that I started a blog mercenaeies this army as I am beginning to work on it on a semi-consistent basis, now. Having had a Kroot Mercenary army since the White Dwarf chapter approved list, I’ve been using it in games since In that time I have added a slew of Forgeworld models, and genuinely had a great experience converting, painting, and playing the army as Kroot Mercenaries. 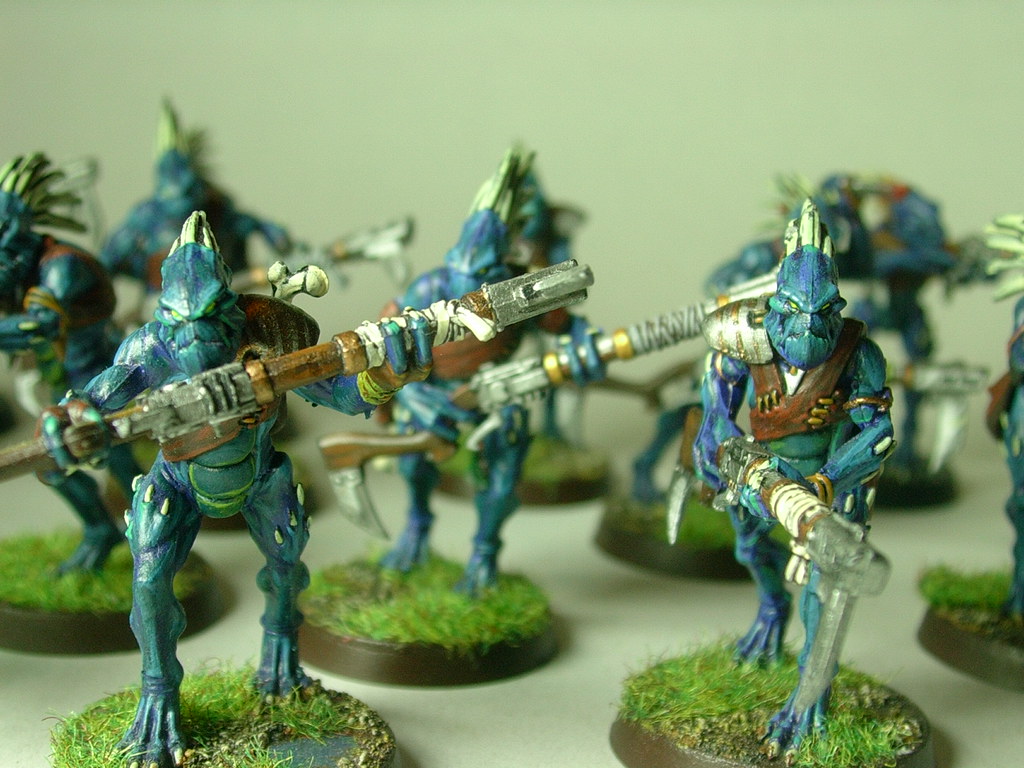 Since the introduction of fifth edition, however, the army list fell into disrepair without any updates. While the tournament organizers at MI40k. At first I tried an Ork Kan Wall. Kroot as Boyz seemed like a logical jump, and the armies play very similarly. Oh, if only the Feral Orks still existed ironically, they were in the same chapter approved as the Mercenary list.

I could not use my Great Knarloc models as Deff Dreads, it was just too hard on the imagination to picture them exploding when hit by a lascannon. In addition, I never painted that many Kroot models to use as a viable horde army. When the Grey Knights codex was released, I had put together an army idea using lots of henchmen, led by Inquisitor Coteaz Inquisitor Krooteaz, as I would have called him.

It would have relied on a shooting line of henchmen, backed up by some Death Cult Assasins as counterattack units. Great Knarlocs could be represented as Dread Knights, and everything in-between had a very reasonable counts-as choice. I had even finished my first counts-as Jokearo: At that point, Grey Knights were considered ridiculously overpowered, an army I try to stay away from, and I’ve never been a fan of static gunlines, so the project never really took off.

I still have all the bits I purchased for Inquisitor Krooteaz, and he will be finished one day solely out of principle. Then came the Dark Eldar codex.

After reading through the rules of the different units, I felt I had finally found stats that I envisioned my Kroot to have- lightning fast and deadly in assault, but with the same fragilities when it came to toughness and armor saves.

I began re-writing the Dark Eldar codex to fit in with the Kroot fiction, and dropped every vehicle choice except the Venom. I let my Kroot models dictate the direction of the codex, as I wanted to use all my favorite models.

The end result is exactly what I had hoped to achieve- an elite, all-infantry army that excels in close quarters and on boards with lots of terrain. There were a few additions to the codex as I played my first few games, namely the inclusion of webway portals and harlequins to deliver them. Trueborn were also added, to deal with enemy vehicles, which the list is extremely poor against due to the removal of all dark lance options. I run the army in 8th edition as a footslogging Aeldari force. Please have a skim over the codex, the most updated link is in my signature.

Popsicle – click to view full reply. Can’t wait to see what’s coming next. These models count as Wracks, and are quite simply Kroot zombies. The Elder Shapers believe, however, that they are reincarnating fallen warriors to once again take to the battlefield. TheChronoTrigger – click to view full reply. TheChronoTrigger I really love the webway portal. 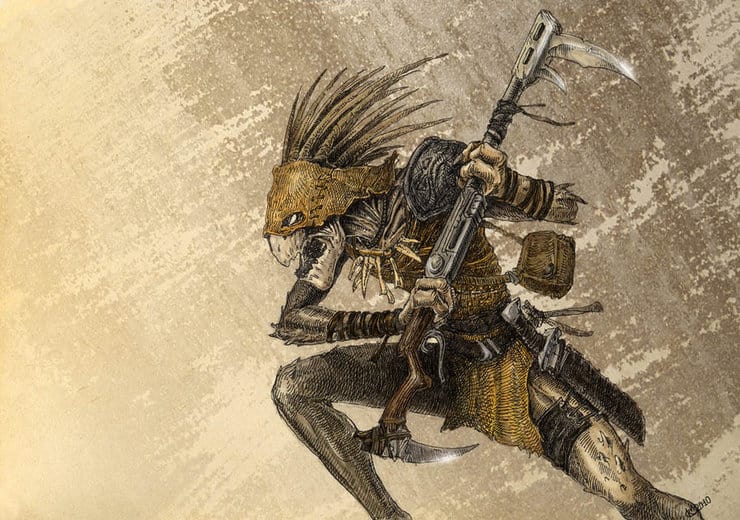 Oaka Painted Reborn, which I’m not happy with: In order to make it look more undead, I painted the kroit over a grey basecoat instead of black. I also left the eye sockets untouched and used a paler, single color for the quill highlights and skin spots. The problem is, when combined with the absence of warpaint, the model mercenqries unfinished. I think I will paint the eye sockets black, and go over the quills, but I think the skin tone is going to be the most important part to emphasize that this is an undead model.

I’m also contemplating adding some grievous injuries on the model, and perhaps even adding the warpaint back on freshly killed? Please add your thoughts, and if anyone has a good method for doing undead skin I’m all ears. On to the reborn – unfortunately the current paint scheme doesn’t come across as being undead – it just looks like a lighter skinned version of his living pals. I’d be inclined to do something a bit more spirit rather than zombie-like and paint them in monochrome, meercenaries like LOTR army of the dead: There’s a decent step-by-step on the GW site: I’d also make the quills really pale, as if they just lose all their colour when a kroot dies.

Plus, ghost kroot could be phasing through all sorts of crazy things! Oaka I reworked the whole idea, and went full rotting zombie Kroot.

I’m glad I did, I like it much better, although it loses the charm of a reanimated warrior and now falls into obvious necromancy. The Night Stalker – click to view full reply.

The Night Stalker Magnificent, thank you for posting this great work, I am so tired of seeing marine stuff. That tutorial kriot me chuckle. GW have basically produced an army that can be painted entirely with an airbrush, 4 pots of paint and a citadel tank drybrush.

Not like them to come up with a ‘buy as little stuff as possible’ paint mercenaties. Savnock – click to view full reply.

Savnock Really, really great mercenadies and beautiful execution, mate! Thanks a lot for posting the re-worked codex too. That’s a beaut of a job, and you’ve found fluff and rules choices that fit really well.

Can’t wait to see what’s next! Oaka I finished the small unit of Reborn. It’s only 3-men strong for the consumption token at the beginning of the game, which will be swiped by an IC. I really liked the idea of painting them up as spirits like suggested, but went with undead because of how they will be played on the table. The unit will give up their token and then hide the rest of the game, more suited for mindless zombies than resurrected warriors. Here are some parts that I will be basing the War Skiff off of counts as a Venom.

Think lots of plasticard armor plates and netting with Kroot holding on as the skiff races into battle. Da Big Mek – click to view full reply. Da Big Mek This army idea is brilliant! I might end up stealing the idea if you don’t mine just because i’ve always wanted to do a kroot list Please do not stop here.

Are you gong to do winged kroot for scourges? Oaka I included scourges in the list as an option, but I will not be doing them. In the games I have played using this list, a unit of trueborn with blasters coming out of a webway portal has done very well for me.

Da Big Mek- I didn’t spend the time making the codex if I didn’t hope at least one person would try it out! TheRavenWolf – click to view full reply.

TheRavenWolf Wow, these look pretty awesome. Sarigar – click to view full reply. Sarigar And the Rule of Cool shall be enforced. Very creative and detailed. Love the tree as the webway portal. Oaka lunarman, the crossbows are bits from the Lizardmen range.

I found them on eBay quite cheap. I may have to rethink not making scourges after I took a look at how those sexy wings fit on a Kroot model.

Colonel Dakura – click to view full reply. O are those the Scourge kroott Absolutely adore what you’ve done with the list!! Particularly like the ‘Eaters of the Dead’ very fluff based! I’ve always wanted to do a Kroot army only I’ve never been overly enthusiastic about using tau with them – would it be cool with you if i steal the idea?

Powerguy – click to view full reply. It’s a Dark Elf War Hyrda from the Warmaster range, with some quills and baggage items added over a greenstuff harness that is difficult to see in the images. The rest of the green stuff is just to mwrcenaries in the horribly molded metal figure. I chose to mefcenaries this model because it has 5 heads to represent the 5 attacks and 5 wounds of the Razorwing Flock, which all look amazingly similar to a Kroot Hound head. In fact, I’m attempting to make this model look just like an evolutionary parallel to the Kroot Hound.

Any thoughts on what to add, delete or change before I add paint? Also, I’m looking for a neat name to call it in the Kroot codex- Kroot Hydra just doesn’t work.

Rayvon – click to view full reply. Rayvon some really nice work here man, I can tell alot of effort has gone into this.